Breaking Down the IDC Top 10 IoT Predictions for 2017 A new IDC FutureScape offers top 10 predictions for the Worldwide IoT in 2017.  The research evaluates 10 emerging trends and ranks them in terms of their likely impact across the enterprise and the time it will take each prediction to go mainstream (meaning the middle of bellcurve of adoption).

We took a close look and found that the list provides an excellent starting point for enterprises – particular industrials - that are steadily getting pulled toward the Industrial Internet and need to learn more.  Let’s break it down. 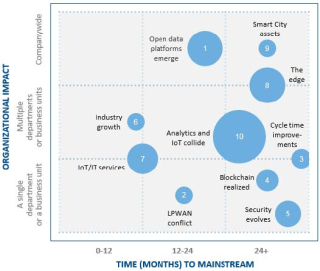 The diagram shows IDC’s 10 predictions. The size of the bubble provides a rough indicator of the complexity and/or cost that an enterprise will incur when acting on the prediction.  The X axis shows the time until a trend becomes mainstream; the Y axis shows the impact on the enterprise organization, with the upper tier showing company-wide impact.  So, for example, #10 IoT Analytics presents the most costly and complex technology issue for organizations and its departmental impact is limited, so its mainstream acceptance won’t occur for a couple more years.

By 2018, IDC says the "Open Data Platform" will emerge as the next frontier in platform discussions. We are already seeing this with organizations such as the Industrial Internet Consortium and the OpenFog Consortium, who are specifying open frameworks for IoT computing and communications. While this may cause confusion for early adopters, open platforms will pave the way for mainstream acceptance.

Despite hype on the benefits of Low-Power Wide Area Networks (LoRa, Sigfox, etc.), IDC predicts organizations won’t begin to adopt it for another year due to a lack of QoS – and then only for non-critical applications.  Keep an eye on this space though, as low-power WiFi for IoT sensor-based networks will make sense across many industries.

This one is farthest off in the future but could be the most important because it unlocks one of the key values of the Industrial Internet – more efficient production of products and services. According to IDC, by next year investments in operational sensing through IoT and situational awareness via analytics will deliver 30% in critical process cycle times.

By unifying data logs for a variety of industries, blockchained services, which typically leverage the cloud, promise to increase productivity and reduce downtime.  For example, manufacturers will be able to share production logs with OEMs and regulators, reducing the time to find information, resolve disputes, verify transactions and expedite deliveries.

As we at Bayshore know, industrial enterprises are now addressing the cultural divide between IT and OT. This will lead to a necessary investment in capabilities to protect their production processes and data from cyber attack and privacy breaches. IDC says that in two years more than 75% of device manufacturers will have improved their security and privacy capabilities.

IDC puts the initial worldwide IoT industry growth at the end of 2017.  Will that be the beginning of the “hockey stick?”  The initial markets driving the growth will be connected vehicles, insurance telematics, personal wellness, and smart buildings, accounting for $96 billion in spending.

As adoption of IoT grows, IDC predicts that 75% of IoT adopters will turn to outside firms for help in strategy, planning, development, implementation, and/or management of these initiatives.  Again, this is a trend we can verify from our experience at Bayshore.  We are seeing an increased customer reliance on carriers, cloud providers, systems integrators, machine vendors, and an emerging class of Industrial IoT architectural experts.

While we are still looking for a universally accepted definition of edge computing, there is consensus on its importance in the success of IoT.  IDC says that in two years at least 40% of IoT-created data will be stored, processed, analyzed and acted upon close to, or at, the edge of the network.

At Bayshore, we are seeing the same thing. Metropolitan areas, paced by progressive CIOs in places as diverse as Barcelona, Chicago, and San Diego, are already reaping the benefits of sensor consolidation and analytics.  Look for more and more success stories in areas such as building automation, utilities, traffic management, and data center management. According to IDC, 40% of local and regional governments “will use IoT to turn infrastructure into assets Instead of liabilities” by 2019.

We agree that this is the mother of all trends. While analytics is the most complex technical and cultural issue, it is clearly the #1 reason to move to the Industrial Internet.  IDC predicts that by 2019, all effective IoT efforts will merge streaming analytics with machine learning trained on data lakes, data marts, and content stores, accelerated by discrete or integrated processors.

The Bayshore IT/OT Gateway is used by industrial enterprises to provide IT with visibility into big OT data and to provide OT with access to applications such as advanced IT analytics. Transformation of OT data (Modbus TCP, DNP3, Ethernet/IP, and so on), into formats that can be interpreted by IT analytics programs (JSON, https, http, etc.) will be crucial to this adoption.